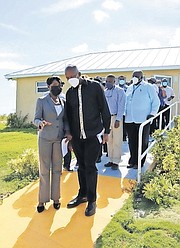 He is leading a two-day comprehensive tour of all public works projects throughout the island. Today, he will tour projects in West Grand Bahama.

The first stop on the tour in the east was at the University of the Bahamas’ (UB) north campus that was devastated by Hurricane Dorian in September 2019.

Dr Strachan shared plans for developing UB-North into a research facility dedicated to the study of the environment and marine sciences.

“We want the campus to become a marine environment field research station. It will have a residential component so that researchers, whether local or international, can stay in the field and sleepover and have all amenities they need,” Dr Strachan said.

However, Mr Strachan said the second floor survived the storm.

Mr Sears and the entourage then took a ferry over to Water Cay, where he viewed the works underway at the dock.

“We are going to Water Cay because there is a dock project under construction there and that project is under the direction of Public Works,” he said.

He said that they will be looking at the dirt road in Grand Bahama heading to the ferry that takes people to Water Cay. The dirt road has lots of deep holes and floods when the tide is high.

“That (the dirt road) is something I have taken note of and we will be reviewing it as we seek to prioritise the various infrastructure projects,” he said.

He also viewed the work at the dock and clinic in McLeans Town. The group also went to Sweeting’s Cay to view the public dock that is being rebuilt there.

Mr Sears also viewed the sea wall that was destroyed in High Rock initially by Hurricane Matthew and worsened during Hurricane Dorian. The next stop was at the proposed site for the East Grand Bahama Comprehensive School, to view the progress of work.

Mr Sears said the comprehensive school is being built to accommodate the senior and junior high school students so that they won’t have to make a long commute to attend school in Freeport. He also saw the Freetown Primary School before heading back to Freeport.

Today, the minister is expected to view a number of projects in Freeport, including the post office and fire station. He will also meet with staff at the Ministry of Works.

In Eight Mile Rock, Mr Sears is expected to see the Fishing Hole Road causeway, the administrative government building, and the Eight Mile Rock High School, and the new school that is being built in Holmes Rock.

“This is a very comprehensive tour covering the island of Grand Bahama for us to see how we can better support and serve these important infrastructure projects,” he said.

Govt would not support electricity rate hike in GB

Brian Laundrie Could Have Taken Ferry From Florida to Bahamas, Says John Walsh

Read Brian Laundrie Could Have Taken Ferry From Florida to Bahamas, Says John Walsh by Inside Edition

Boohle to debut at Bahama Lounge

Read Boohle to debut at Bahama Lounge by Mmegi

On to the finals

Read On to the finals by Telegraph Herald